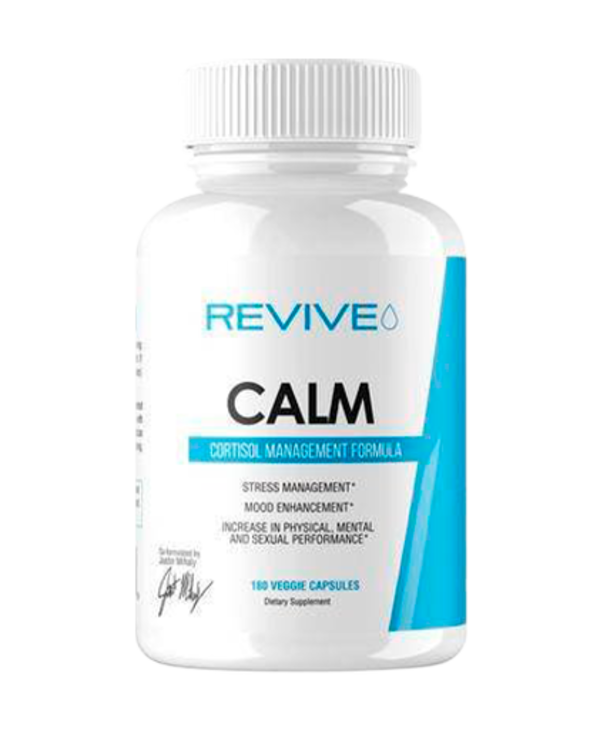 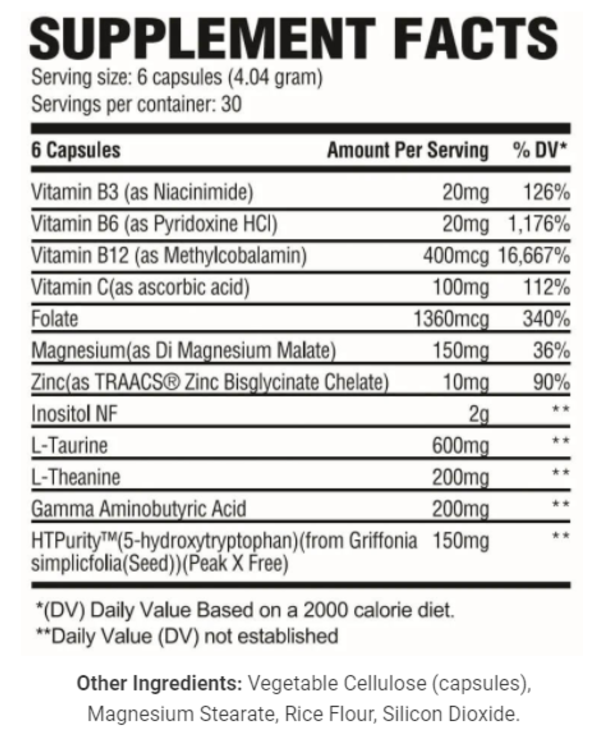 Revive Calm is a new supplement to regulate cortisol levels. The supplement perfectly reduces stress, improves mood and increases psychological functions. The preparation supports the work of the brain and adds energy during the day....Read more

Revive Calm is a new supplement to regulate cortisol levels. The supplement perfectly reduces stress, improves mood and increases psychological functions. The preparation supports the work of the brain and adds energy during the day. Using Calm translates into better concentration and well-being. The combination of natural ingredients ensures the proper functioning of neurotransmitters in the brain, reduces the reaction to stress and is responsible for the proper neurological functions.

Stress relieving preparation rich in the most effective ingredients supporting the functioning of the nervous system. It improves your well-being during the day, supporting coping with stress during the day. Calm is a natural preparation that affects the overall physical and mental condition of the body.

The use of the supplement promotes mental performance, increases concentration and facilitates remembering. It has a strong neuroprotective effect and allows the body to regenerate during sleep.

Inositol NF - is a natural compound necessary for the proper functioning of our body. It improves the mood, regulates the endocrine system, lowers the level of bad cholesterol and stimulates the regeneration of all tissues of our body. In addition, it is essential for the proper functioning of the reproductive system of men and women, which is why it is sometimes called the "fertility vitamin".

L-Taurine - this amino acid increases the endurance of the body and counteracts the symptoms of fatigue, and also improves our concentration. Taurine enables faster and more effective post-workout regeneration. Another important feature of this amino acid is that it reduces the negative effects of stress while we are on reduction and following a low-carbohydrate diet. Taurine is also anti-catabolic and supports the transport of creatine.

L-Theanine - is a non-protein amino acid found naturally in green tea leaves - camellia. It has psychoactive properties because it easily crosses the blood-brain barrier. It stabilizes the mood, calms down, relieves symptoms of stress and anxiety. Also used as a nootropic agent - improving cognitive functions, work efficiency and learning efficiency.

5 htp - a compound that is a direct precursor to Serotonin, a hormone that plays a very important role in the processes of appetite regulation, mood improvement and optimization of the secretion of other hormones. Since Serotonin itself does not have the ability to cross the blood-brain barrier, an effective way to increase its level is supplementation with its precursors, among which the most effective is 5-hydroxytryptophan. Numerous studies show a direct relationship between the administration of 5-HTP and the improvement of sleep, suppressing hunger pangs, normalizing the level of insulin, cortisol and prolactin or relieving anxiety states.

GABA - γ-aminobutyric acid occurs as an organic chemical compound from the group of amino acids, which acts as the main inhibitory neurotransmitter throughout the nervous system. It affects not only the building of muscles, but also helps to fall asleep, relieves anxiety symptoms, relaxes and calms down. GABA affects the nervous system by increasing the excitability threshold of nerve cells and thus reducing their sensitivity to stimuli. GABA causes relaxation, calming, and - due to the increased release of endorphins - a general improvement in well-being and a better mood.

Vitamin B3 - a B-group vitamin that plays important roles in the body - is necessary, among others, for the proper functioning of the brain and peripheral nervous system. Additionally, nicotinic acid is involved in the synthesis of sex hormones, cortisol, thyroxine and insulin. Scientists confirm the information about the equally surprising properties of vitamin B3. According to them, it improves the ability of immune cells to destroy Staphylococcus aureus bacteria (golden staph). Under the influence of this vitamin, the number of white blood cells increases, which can neutralize and absorb harmful bacteria

Vitamin B6 - is a coenzyme of many enzymatic changes in the body, including transamination and decarboxylation of amino acids. It is particularly important in the transformation of tryptophan, which produces serotonin and nicotinic acid. It is essential in the process of phosphorylation, influences glycogenesis and glycogenolysis in muscles, and plays an important role in immune and hematopoietic processes. It reduces the secretion of prolactin, which has a negative effect on male libido.

Vitamin B12- belongs to the group of vitamins that are soluble in water. It is known by other names: cobalamin or cyanocobalamin. It is not a single substance, but a chemical compound containing, inter alia, cobalt. Vitamin B12 deficiencies are particularly dangerous and concern mainly the mental sphere, the nervous system and the hematopoietic system. Vitamin B12 acts as a non-protein component of the enzyme necessary for its activity in the production of monoamine neurotransmitters important for the brain: dopamine, serotonin and norepinephrine. Cobalamin deficiency results in impaired synthesis of these important neurotransmitters, which may limit the ability of cells to communicate in the central nervous system. It manifests itself in a worse mood, decreased energy and sleep problems. In addition, dopamine deficiency is the cause of Parkinson's disease development. The appropriate level of vitamin B12 is therefore extremely important for the proper functioning of the brain.

Vitamin C- is the basis of the skin, bones, cartilage, tendons, blood vessels and valves in the heart. Ascorbic acid is a strong antioxidant, it accelerates the decomposition of harmful substances resulting from intense training, it also effectively protects against infections. Another advantage of this vitamin is the improvement of iron absorption and the improvement of oxygen transport to cells, which translates into improved muscle condition. Effective absorption of oxygen extends the working time of the muscles and delays the stage of anaerobic respiration of the muscles that causes the formation of soreness. In addition, vitamin C effectively flushes lactic acid from the muscles, and thus accelerates the regeneration process after training.

Magnseium - supports the proper functioning of the nervous system, affects psychological functions, is responsible for healthy bones and teeth. It contributes to the activation of about 300 enzymes involved in carbohydrate, fat and protein metabolism. In addition, it has a positive effect on blood vessels, acting as an anticoagulant.

Zinc - is one of the most important minerals for your body because it is involved in many metabolic processes (including accelerating the body's protein synthesis). The most important activity of this mineral, however, is its influence on the appropriate level of testosterone, which is very important for maximum and rapid gains. In addition to immune support, zinc also plays other important functions. It is an essential ingredient in superoxide dismutase, one of your body's most powerful natural antioxidants. Zinc also stimulates the activity of about 300 enzymes that promote biochemical reactions.